First, thank you to all project participants who have helped collect this valuable information! We are so grateful for this community that is clearly eager to conserve pollinators: from the 2019 to the 2020 season, the number of participants nearly doubled! This past year was difficult for many reasons and despite adverse conditions we were happy to learn in our post-season evaluation that the Atlas served as a safe and purposeful activity for many of you.
Seeing the photos and stories many of you shared on social media was fantastic! Whether you were surveying for the first time, observing different species, or exploring one of Nebraska's many beautiful landscapes, we were glad to see and learn more about your experience. We invite you to stay connected with the project and other volunteers using Facebook (groups/nebumblebees) or Instagram (@nebumblebees), and keep sharing your photos using #NEBBAtlas! 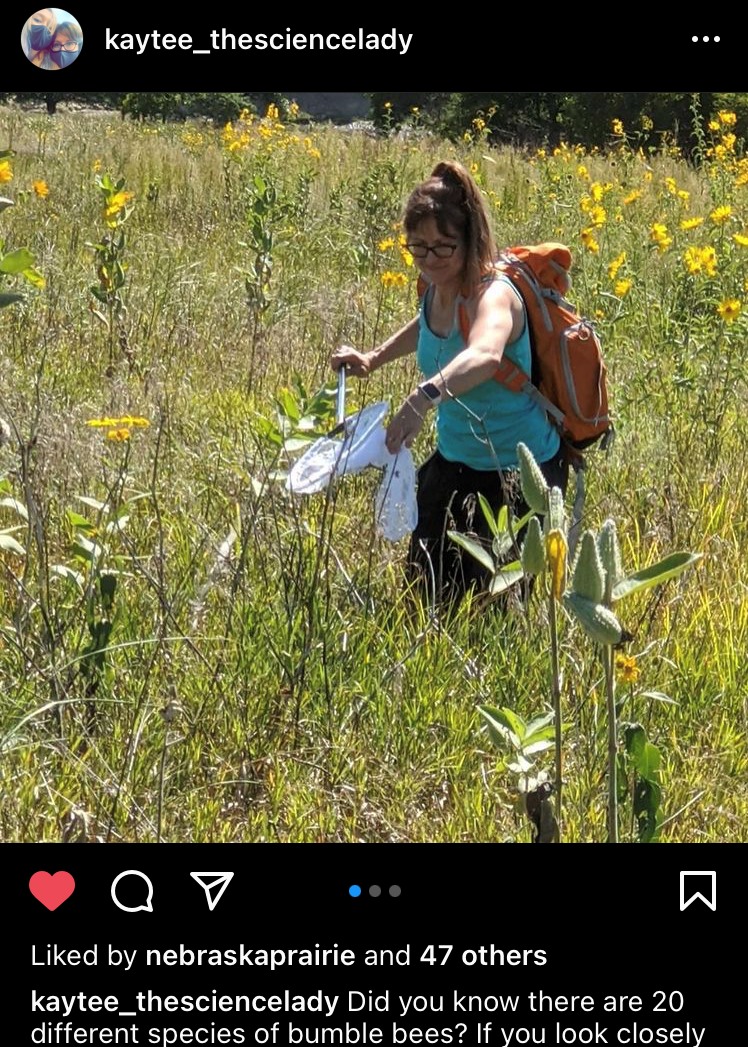 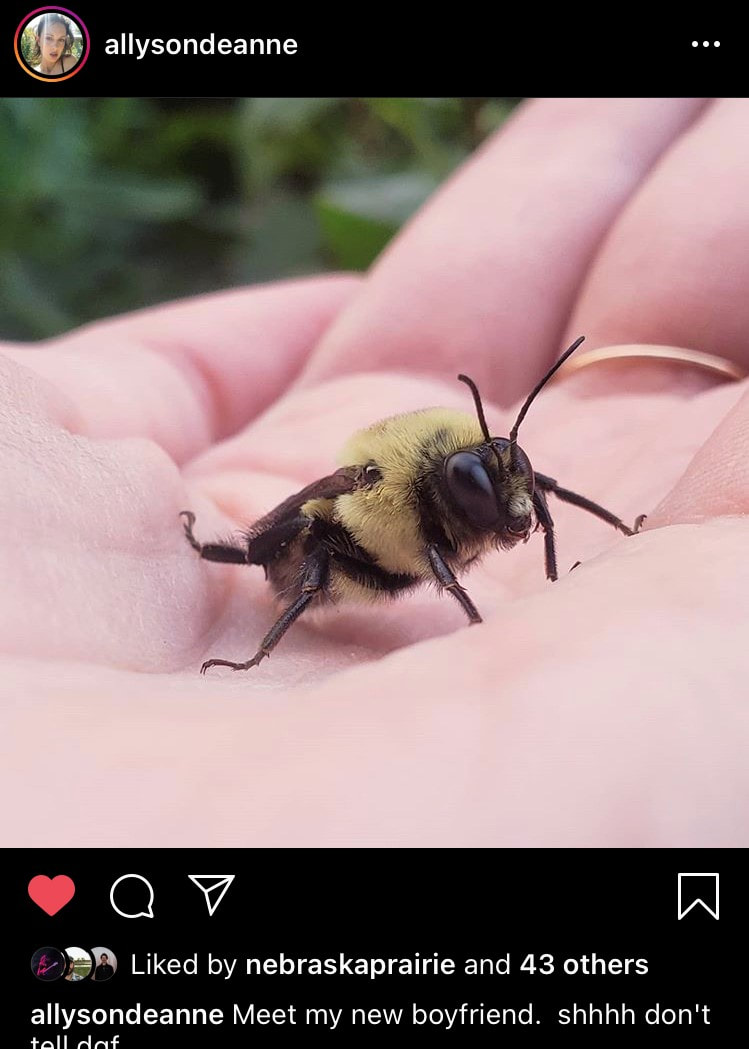 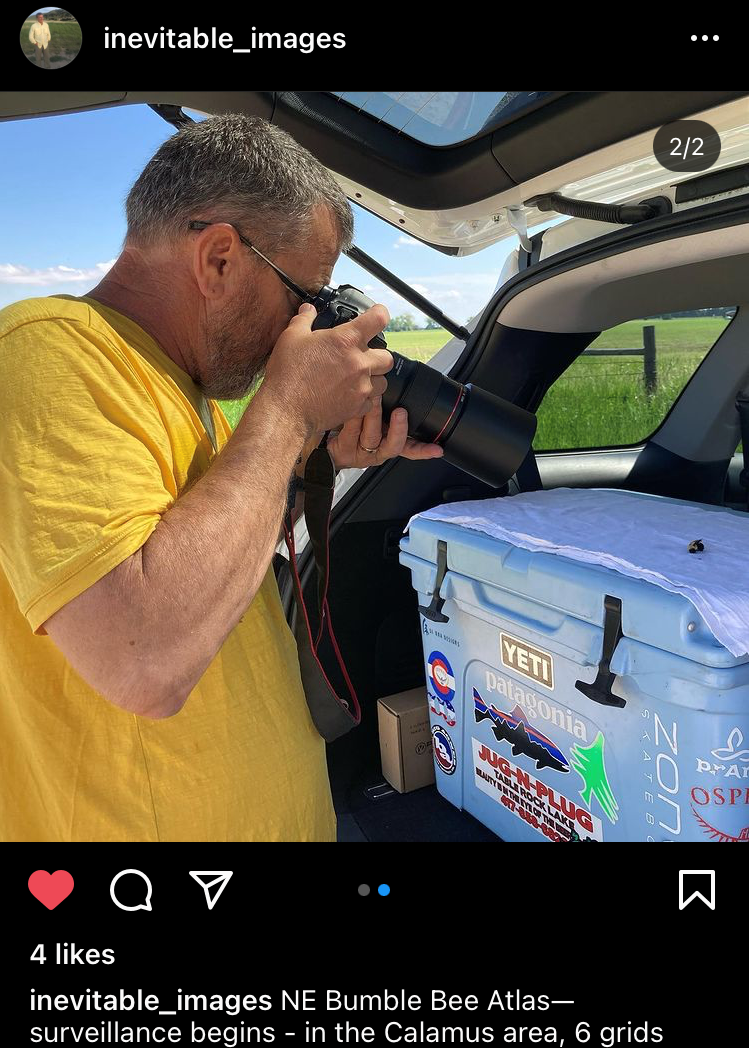 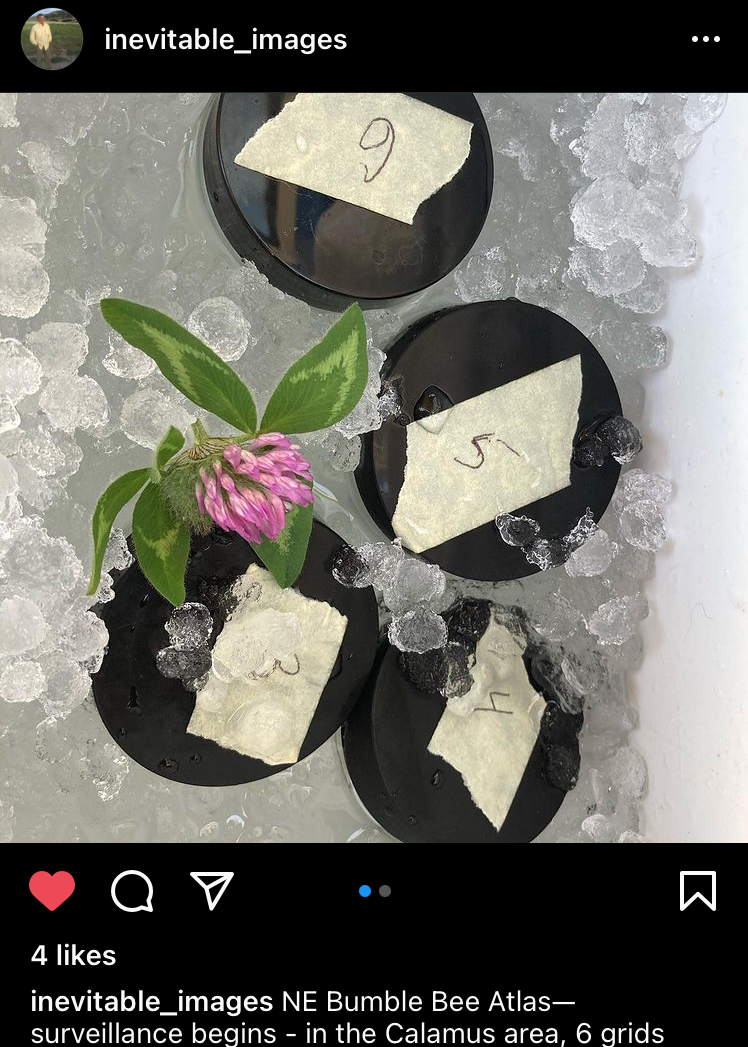 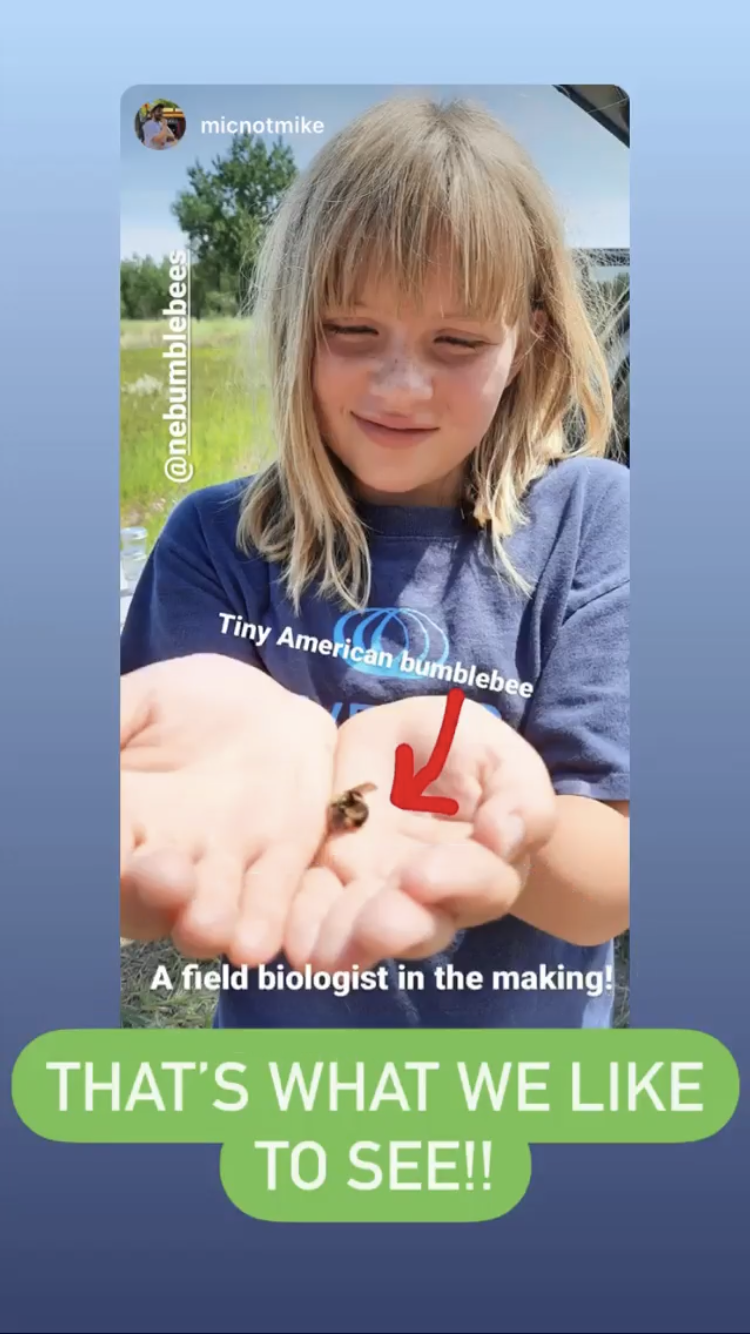 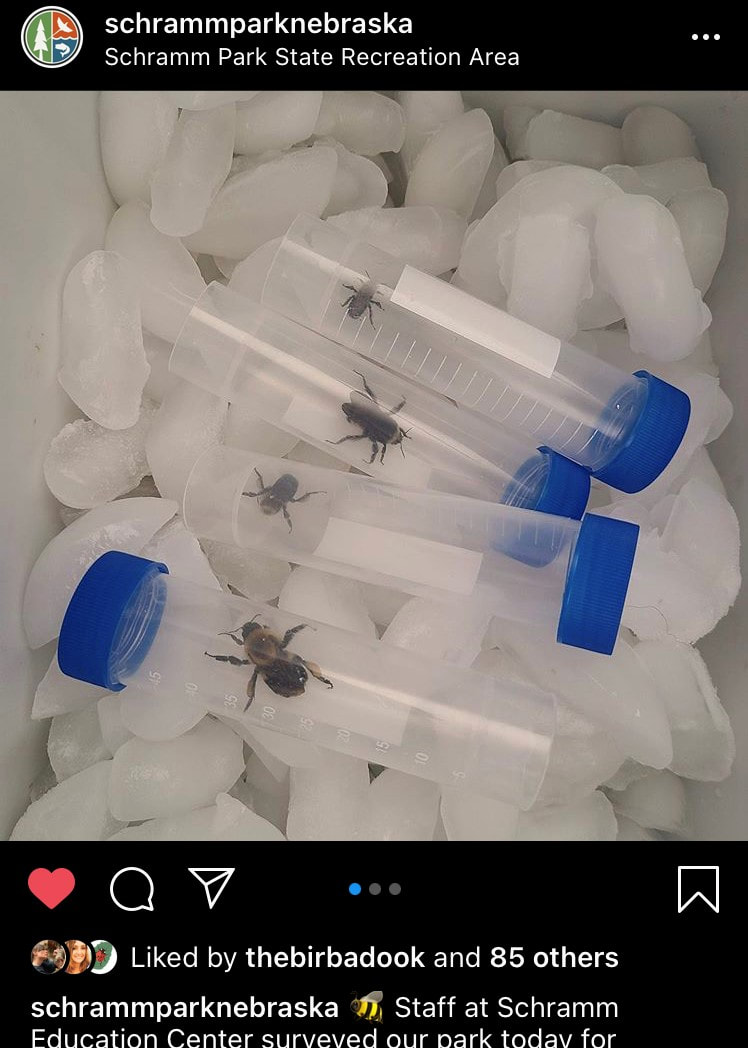 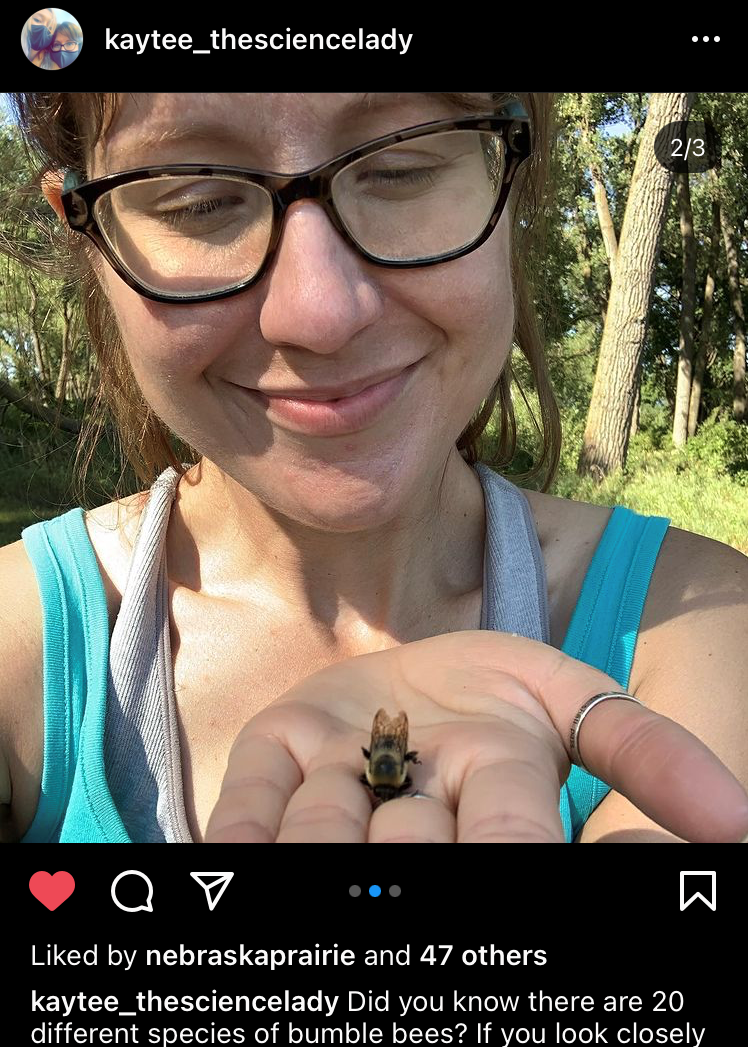 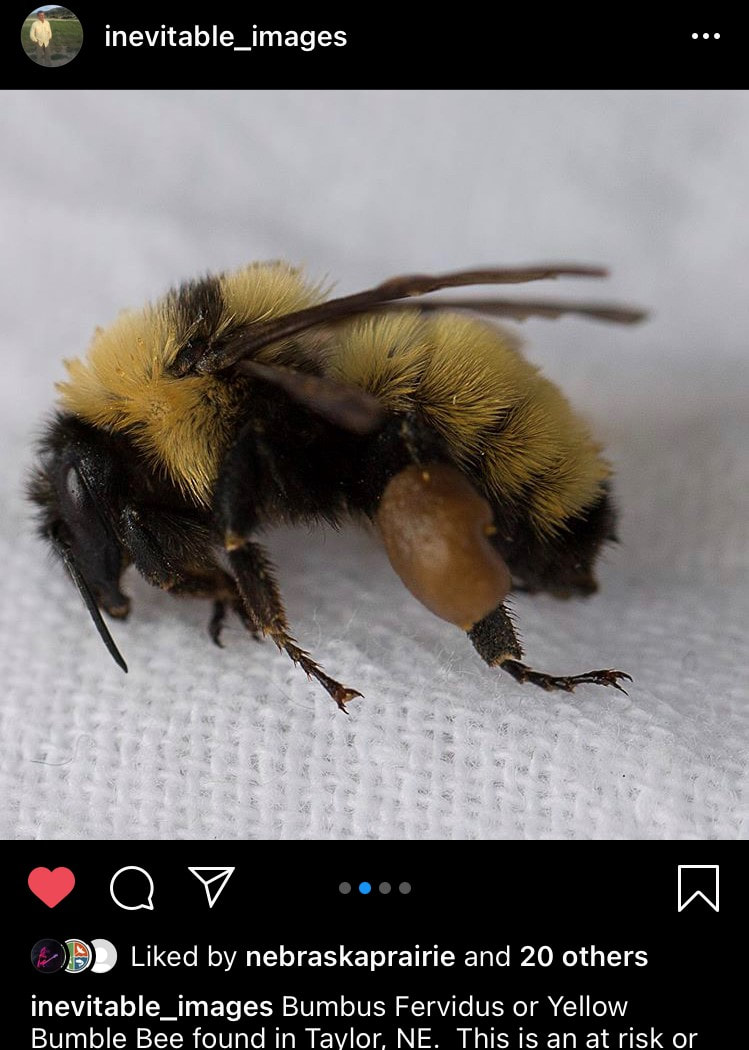 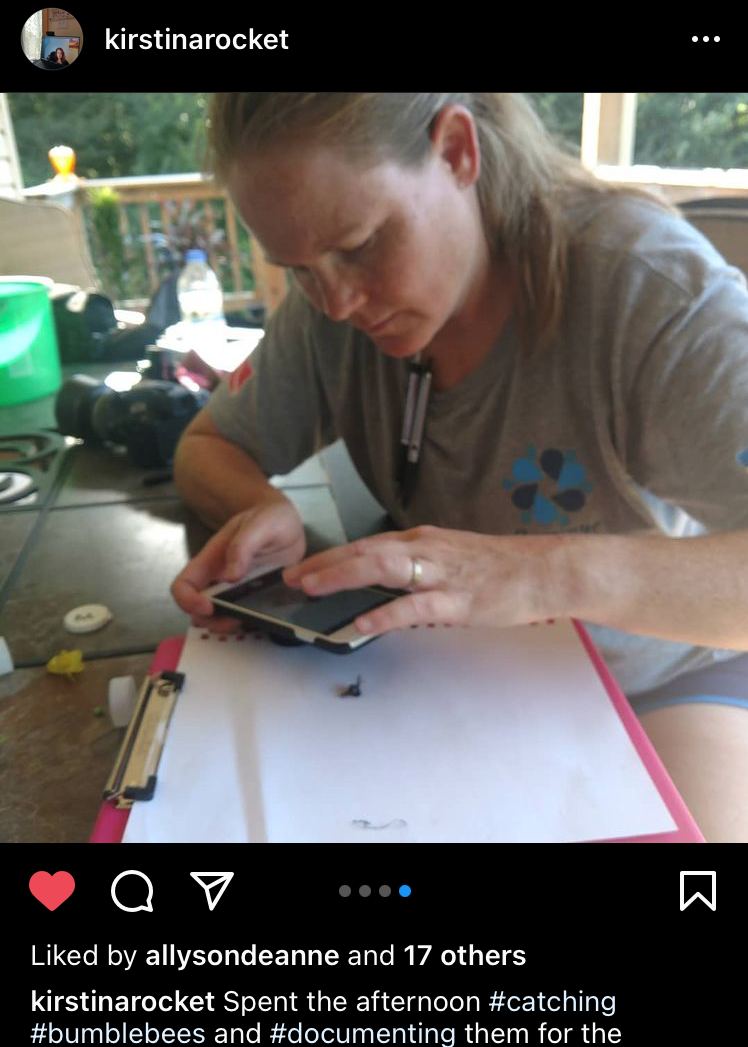 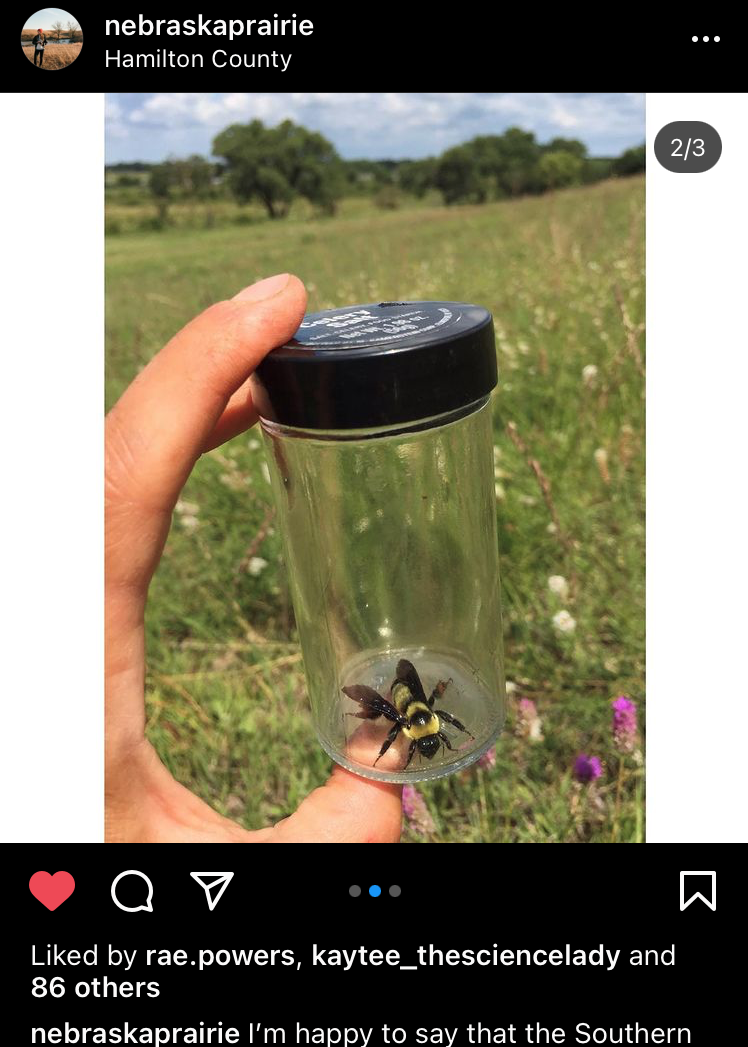 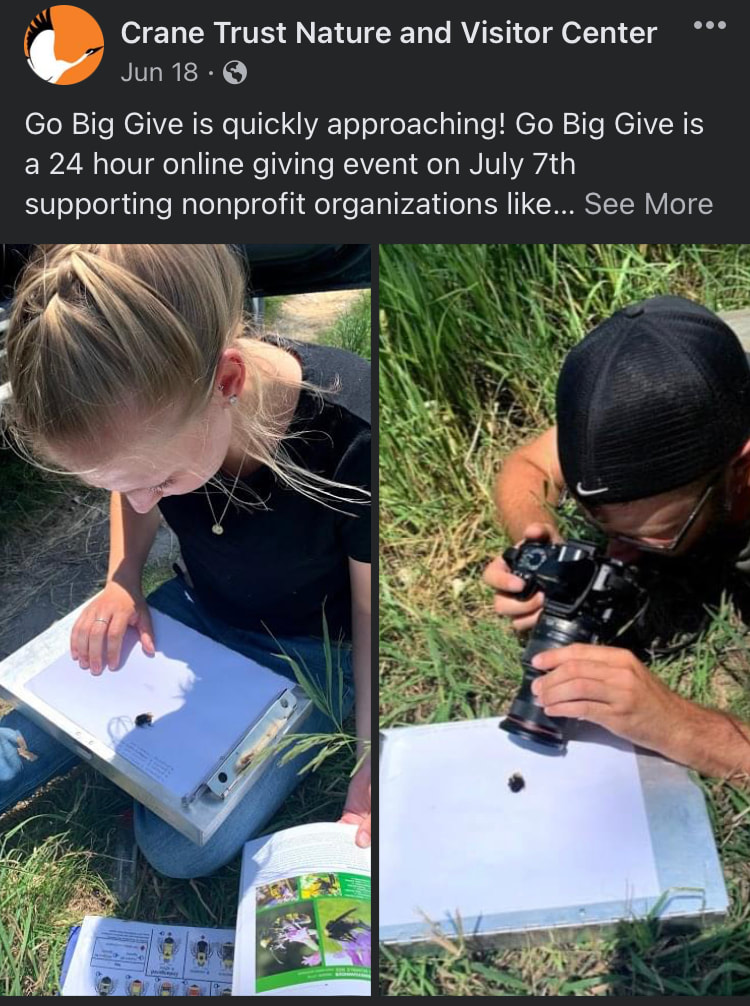 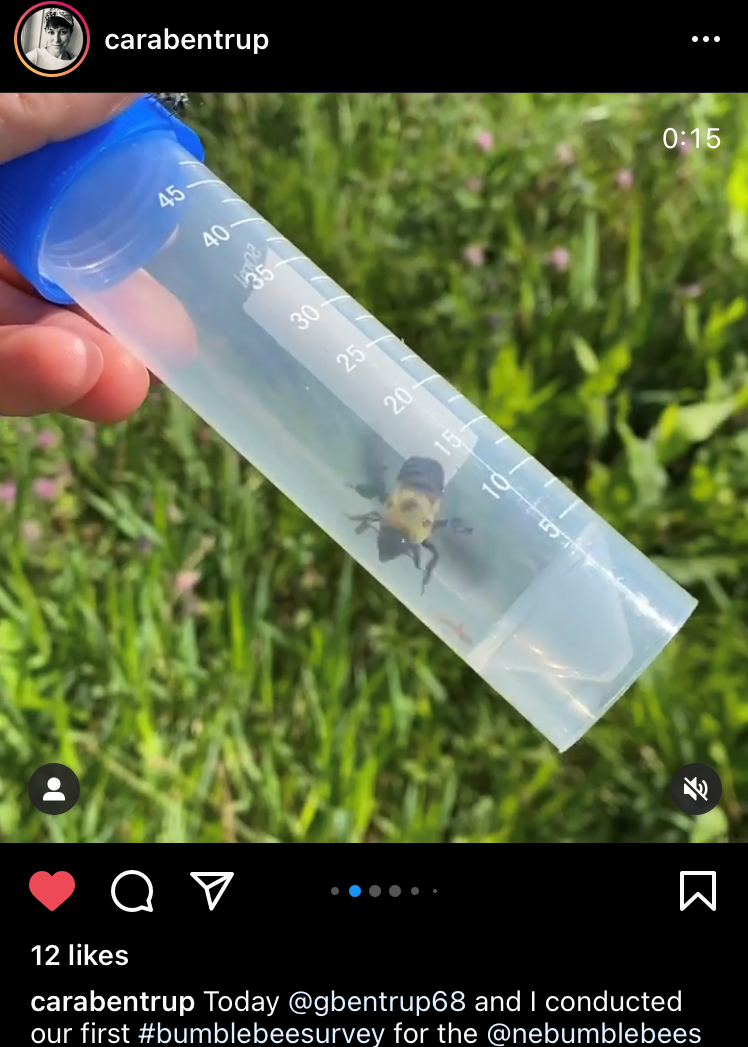 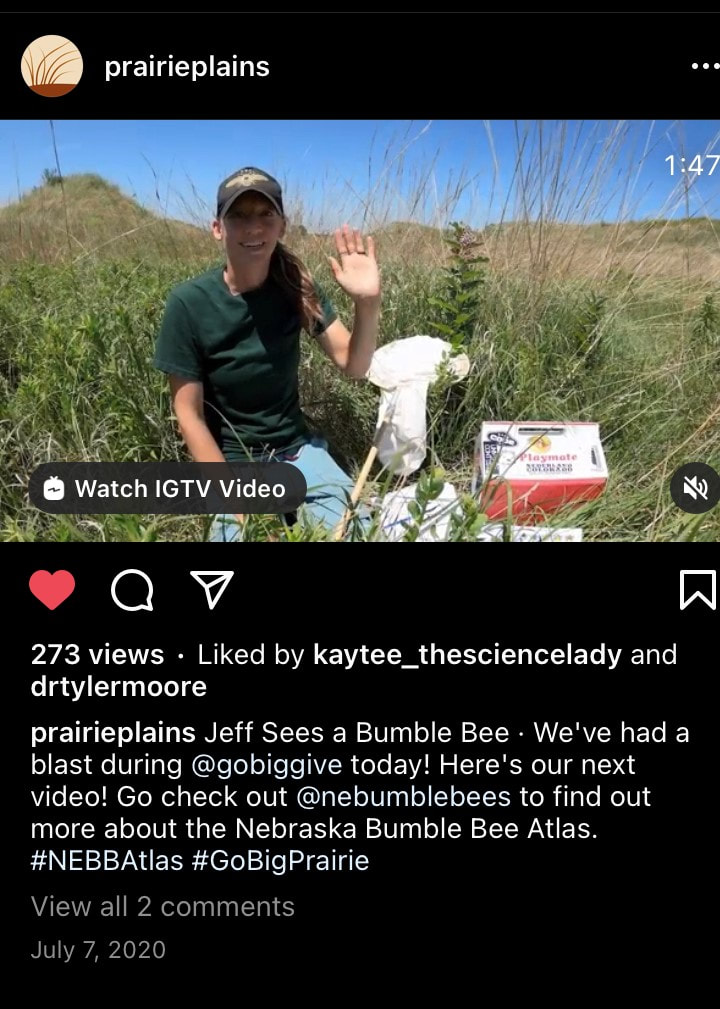 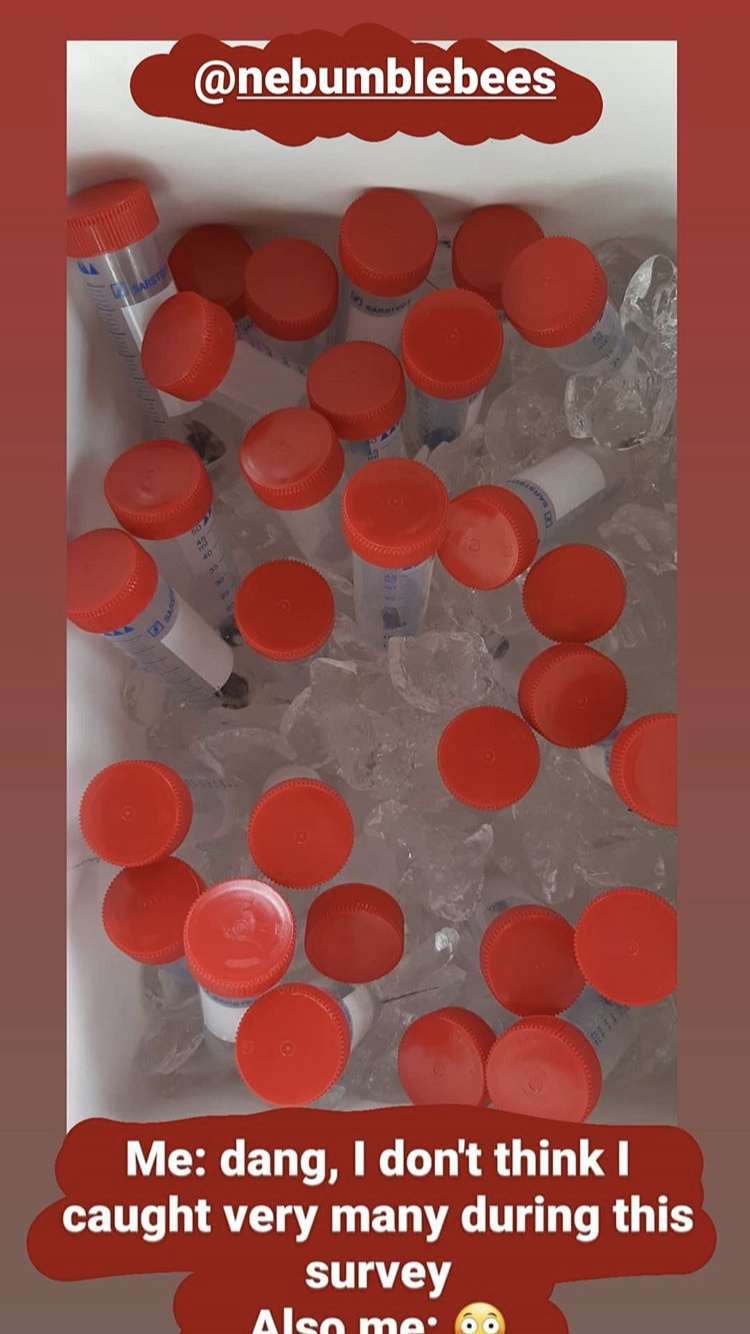 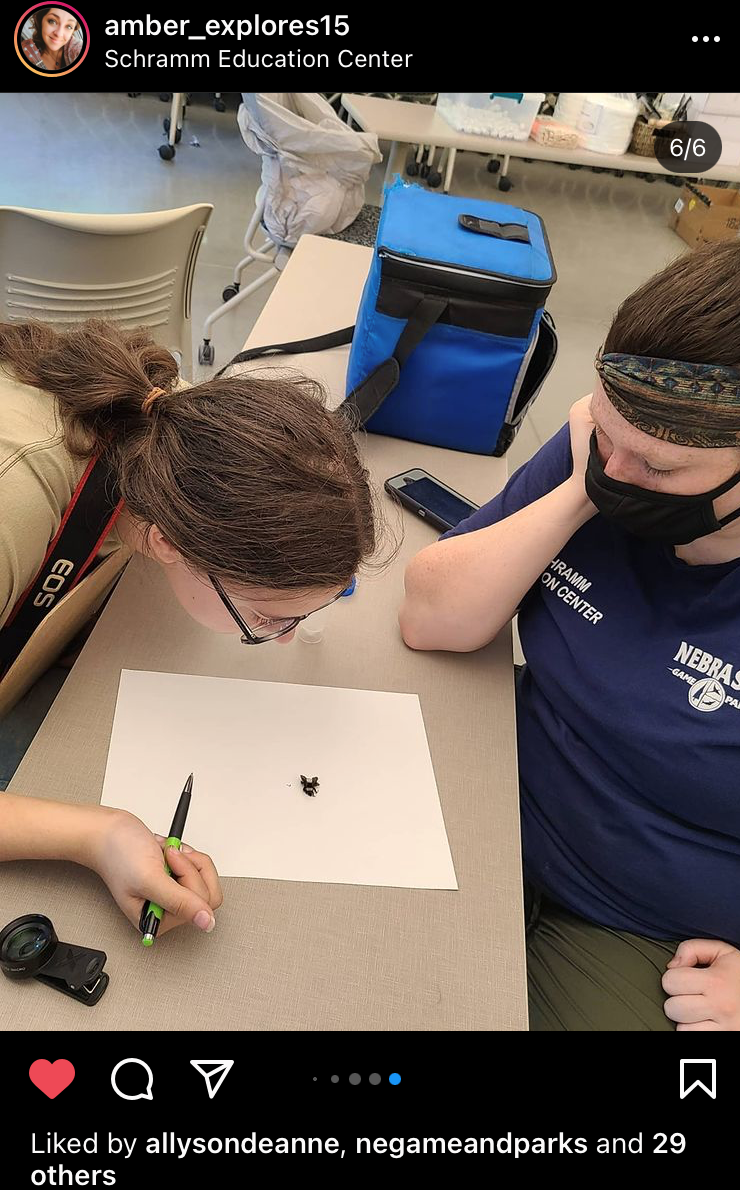 Over the last two seasons, more than 100 participants have ventured out to conduct bumble bee surveys. With the increased participation from 2019 to 2020, we witnessed a significant increase in the number of bumble bees observed and the number of habitat surveys nearly quadrupled!

The map below depicts data collected during formal surveys (roadside or point surveys) over the last two seasons. The base color represents the number of habitat surveys conducted in each cell (darker = more surveys).

To look at overall diversity thus far, we included incidental observations (those that were not associated with a formal survey) to get a better understanding of distribution in the state. Incidental observations add nearly 1,000 more bumble bee sightings and increase the number of species we've observed from 10 to 11 thanks to observations of the Lemon cuckoo bumble bee (Bombus citrinus)! Only 1.6% of all observations were unable to be identified to the species level and were classified as Bombus sp., meaning participants took fantastic photographs that experts were able to identify.

It is no surprise that the majority of observations are Brown-belted and Common eastern bumble bees, these are both common and abundant throughout their range. What is surprising, however, was seeing that the American bumble bee (B. pensylvanicus) was the third most commonly observed species, making up nearly 20% of all observations. While Nebraska has historically been a stronghold state for this species, such high levels of decline have been detected in other parts of it's range that this species is considered vulnerable to extinction.

The maps below show where each of the detected species have been observed during the Atlas. Scroll through the maps using the numbers on the left to see detail for each species, they are listed from most-to-least observed. This type of information will allow us to update distribution maps and make comparisons to historical records to assess range expansion or decline. You can further explore these records by using the interactive map on Bumble Bee Watch.

Moreover, Atlas participants observed this species in 13 counties where it had not been observed prior to 2019, which is fantastic! Below, links to each new county record are listed, along with the Bumble Bee Watch username of the observer, and a map of the new and existing records.
​Burt (MarlaGrier), Custer (cody.drier), Dakota (MarlaGrier), Fillmore (TheWxMoth), Jefferson (ruralroots), Kimball (MicRohde), Merrick (SarahMBailey),
Phelps (Sherok50), Polk (teachsci), Scotts Bluff (klamke), Sheridan (5mayflower), Washington (thebirbadook), ​York (pslatin) 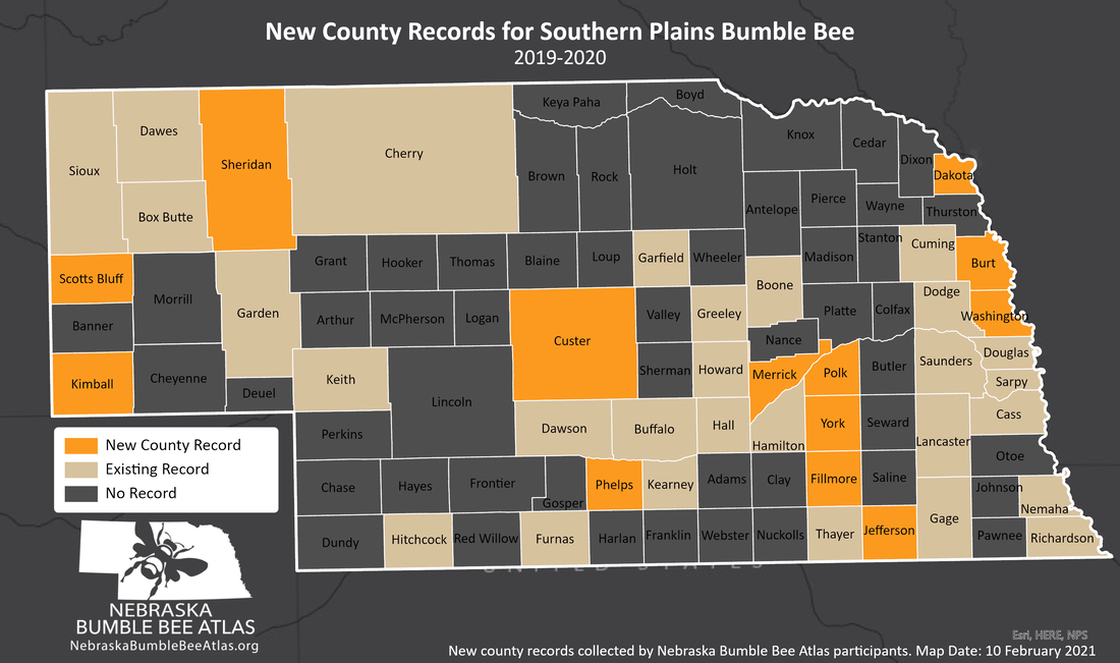 Plant-pollinator interactions are crucial when it comes to understanding the foraging needs of bumble bees. These interactions allow us to understand which plants bumble bees utilize in different parts of the state and across the growing seasons. For example, the dataset generated by Atlas participants can be used to detect which plant species are preferred by different bee species throughout the year. This information can help inform land management and restoration efforts in ways that can help support at-risk bumble bees by potentially increasing the availability of key plants on the landscape.

The graphic below depicts the plants that were most frequently visited during habitat surveys conducted in 2019 and 2020. The blue bars represent the percentage of total bee visitation made to each particular plant. For example, the first bar on the left shows that roughly 9% of all recorded bumble bees were observed on sunflower (Helianthus sp.). The orange dot represents the number of bumble bee species that were observed visiting each particular plant (e.g. 5 different species were observed on sunflower).

Whether you are gearing up for round 3 or jumping in for your first survey season, we are happy to have you participating in the third season of the Nebraska Bumble Bee Atlas! This project would not be possible without the help of all of you. As with the last two seasons, we have prioritized a set of grid cells. This year, priority cells represent:
View 2021 Survey Priorities